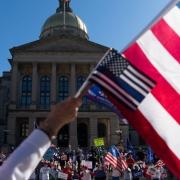 We’ll Have a (Not So) Blue Christmas Without You, Trump

In the quiet after the storm, this blog post hopes to take stock of what happened in the US election, why markets were surprised, what the results means for US policy (fiscal, monetary, foreign, climate) going forward, and the implications of this for US and global growth, equities and FX markets.

The US election became the advent calendar no one wanted, with people all over the world waiting up all night only to open a door to another bad joke. Election Day became Election Week as delayed results trickled in. We expected a delay for Pennsylvania, which did not begin the counting process until Election Day, but Georgia was on everyone’s mind as the margins crept ever so slowly into Blue territory for the first time since 1992. This was welcome news for the Biden campaign, after the Blue Wave predicted by polls for other Southern states, such as Florida and North Carolina, did not materialise. For Florida, it seems things went awry in Miami-Dade County which saw Biden win by 23% less than Clinton had done in 2016, largely due to a Cuban-American swing towards the Trump campaign, which successfully tapped into the persisting fears of communism founded in the not-so-distant Castro era and somehow associated it with a Centre-Right Democratic candidate. Though this association was certainly assisted by Bernie Sanders’ previous complimentary comments towards Fidel Castro,[1] it was mainly allowed to fester due to the lack of attention the Democratic Party dedicated to this particular demographic – a mistake that would prove to be decisive in Florida.

However, after Pennsylvania and Nevada had reported a large majority of Democratic votes, the election was eventually called by news outlets: Joe Biden and Kamala Harris were indeed behind the big calendar door for Christmas Day, as expected. There will be delays before this is declared officially by the General Services Administration, with recounts in Georgia and various legal challenges sprung by the Trump campaign, but history tells us that this will not likely overturn any state-level results.[2] The battle for the Senate will continue into the New Year, with two seats up for grabs in, yes again, Georgia on the 5th January. Unlikely to win both, we’re likely looking at a Democrat administration faced with a divided Congress for the next 4 years which could be problematic for the near-future when viewed against the backdrop of a faltering economy and still-rising COVID-19 cases; when recovery and markets depend upon decisive policy.

Since the end of the CARES Act on the 31st of July, market sentiment has been highly sensitive to news of negotiations surrounding further fiscal stimulus to lift the US economy from the bottom of the ‘fiscal cliff’ it parachuted off in August. Federal Reserve Chairman Powell has repeatedly affirmed the old Keynesian assertion of the economic necessity of fiscal policy, as a complement to the extreme efforts of the Fed to keep monetary policy as loose as it has been since March. Democrat House Speaker Nancy Pelosi held firm in her offer of $2.2trn in deadlock with the Trump administration proposing $1.6trn. Biden ran on a manifesto of a significantly larger fiscal package, taking inspiration from the progressive-wing of his party, and investors priced this in positively for global equity and cyclical assets, outweighing concerns surrounding tax hikes and regulation which were more relevant to US equities. When it became apparent that a Blue Wave was less likely on the back of the Florida result, US equity markets shot up whilst global stocks remained more nervous. Cyclical currencies dropped versus the dollar as this fiscal outcome was initially priced out and global economic growth prospects looked a great deal shakier.

Under the assumption of a split congress, the fiscal stimulus under the Biden Administration is likely to be a a) “skinny” and b) one-off affair; insufficient to combat the cliff of unemployment and suffering businesses who have been abandoned, bereft of fiscal support, since summer. Growth and recovery will no doubt be hindered as a result, as consumer demand fails to be sufficiently stimulated and an outbreak of bankruptcies ensues as some service-sector, especially hospitality, businesses are forced to fold. However, the promise of the three successful vaccines and concomitant hopes of reopening in spring might be enough to tide markets through, albeit with some business fatalities (not to mention the human fatalities, which thus far have tragically totalled just over 255,000). In the meantime, the Fed will be forced to pick up the slack, keeping rates at the zero lower bound and keeping open its expansive menu of alternative measures until demand picks up and the economy can restart. At least Fed independence is likely to be spared under the new administration, a concern associated with Trump’s proclivity for nominating candidates who are closely tied to his administration, and who advocate some whacky policies, to the Board of the Federal Reserve.[3]

Regardless of what happens now, small businesses and workers will have fallen out of productive markets over the last eight months, resulting in hysteresis that will likely weigh on productivity far into 2021 and change the foundational structures of markets. Hysteresis describes the lingering impact that this pandemic will have irrevocably “switched on”.[4] There will be a supply-side deadweight loss almost, as skills and innovation will have been lost; the economic structures and systems as we know them have shifted towards online shopping and new tech sectors, leaving those working in traditional hospitality sectors behind. Biden’s “Build Back Better” campaign will have to be substantial enough to begin to put the economically displaced back on track, but will be limited in scope by a Republican congress that would rather leave this job to the free markets.

In comparison to Europe where zombies will continue to walk and groan, however, Schumpeterian creative destruction may mean that more productive companies replace the fallen in the US, and allow the reborn to take the economy in a new direction. Perhaps the unemployed will become the new entrepreneurs. Though there will be concomitant significant adjustment cost, asymmetrically incurred with lingering distributional impacts, especially in the context of huge Fed support for the big fat equities via its corporate bond purchases that will likely result in increased market concentration. Further, the zero lower bound has kept some zombies on life support, offering costless refinancing thus enabling the perpetual rollover of debt by non-profitable firms true both in Europe and in the US. This will pose challenges to both productivity in the short term, as well as weighing as a cost to policymakers in the long run, when deciding to eventually hike rates.

So if fiscal policy is likely going to be status quo, why was there such a significant market reaction in currency markets in response to the election? Foreign policy; particularly for emerging markets. Openly hostile America First rhetoric now will resort back to the traditional charming, conciliatory America First approach characterised by the Obama administration, which may not be any less hostile; but much more covert in its aggression. It may also offer support to dictators or pursue bellicose foreign policy in aid of US interests, but will smile whilst doing so. For China, this makes Biden a dangerously more effective foe who is now able to work with allies (Europe) and leverage global influence in order to protect its interest, escaping the Thucydidean Trap into which Trump launched both superpowers (to everyone’s detriment), harnessing its capacity to cling onto international dominance for a little longer.

More specifically, Biden will likely re-sign the Paris Climate Accord and the Iran Nuclear Deal, and re-join the World Health Organisation. The United States will likely resume its seat at the helm of NATO, ironically created during the eve of the Cold War as a means to secure US global dominance against the rising superpower of the day. If lessons have been learned, allied cooperation will prove essential in maintaining US hegemony against the rising geopolitical and economic strength of China, as it was versus the USSR in the 1950s and 60s. So don’t be fooled – America remains First, but no longer stands alone.

The position of the US dollar as the universal currency may depend upon the international geopolitical role of the US, with trade volumes and financial dependency being supported by a more global approach. Moreover, the dollar holding strong as the global reserve allows the US an outsized geopolitical and economic influence. Indeed, there is a feedback loop in that the dollar’s reserve status reinforces dependence upon the US, as we saw when the Fed became the world central bank in March, as dollar liquidity became quintessential to avoid a crash. Similarly, access to Fed swap lines and US payment systems (Fedwire, CHIPS, SWIFT) enforce and reflect US global power, with the US essentially reserving the rights to control admission to the global financial system. Not to mention the economic benefits accrued from the stability inferred from debt denominated in the home currency. This dollar system will be more cautiously defended by a dual geopolitical and economic approach to maintenance of the US’s unique and advantageous global position.

With a more subtle and less overtly virulent approach from the US in its foreign policy will come settled market volatility and a chance for emerging markets to get some much-needed relief after a turbulent year, oft frequented by bouts of risk-off sentiment and capital flight. Further, China and East Asian currencies will see less turbulence from trade wars and geopolitical hostilities.  Though not strictly due to a Biden win, a weaker dollar will lower the burden of dollar-denominated debt for emerging markets, who have had to invest what they can in supporting their economies during the global pandemic, with many frontier markets seeking to extend loans from the IMF.[5]  This will shield them somewhat from an escalating position of crisis that could result in defaults in the event of a strong dollar and stalling growth.

Now we’ve seen promises of a vaccine, we’ll likely see a de-grouping of East Asian currencies (as shown in chart below with KRW, CNH, AUD, TWD) which were supported by better COVID-19 management alongside proximity to China, with those more US-linked economies that suffered from particularly bad COVID-19 outbreaks (BRL, MXN) and US turbulence from both longer and less effective lockdowns and the election. Now the election volatility is out of the way, investors may see an opportunity to load up on risk assets, seeking yield in a zero lower bound environment, favouring inflows into Emerging Markets. Due to restrictive policy room for fiscal support measures, many emerging markets lost their yield advantage from cutting interest rates, though the rate differentials versus developed market peers still remain supportive.