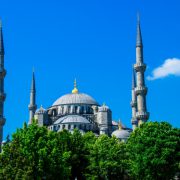 The Turkish lira was a highly volatile currency in 2017, beleaguered by persistently high inflation, an indecisive central bank, and continued political controversy and risk. The lira depreciated by 6.7% against the US dollar and 9.4% on a trade-weighted basis, while implied volatility (against the dollar) rose as high as 23% on an annualised basis, at times. This was despite strong GDP growth and strong local equity performance. So why are currency markets concerned?

Fundamentally, the Turkish economy is highly exposed. It runs a current account deficit of around 5.48% of GDP. This leaves it highly dependent on the sentiment of international investors and exposed to political sanctions. For example, with 16.9% of exports coming from tourism, visa restrictions (as during the Zarrab trial in the US) have the potential to severely affect the external balance. Figure 1 shows how exposed the economy is. Most of Turkey’s current account deficit comes from the trade balance, which is still stubbornly negative, while the capital flows needed to sustain this have come from portfolio investment and reserve assets.

The deficit is not new. Turkey has run a persistent, significant current account deficit since around 2005. So has anything changed? Firstly, the composition of the financial inflows required to balance the current account deficit has shifted towards less sustainable sources, since the failed coup in July 2016, and its aftermath, led to a re-assessment of the political risks of investing in Turkey. Foreign direct investment (FDI) and other investment (consisting in Turkey’s case largely of cross-border bank loans), have dropped off as a percentage of GDP. Reserve drawdowns and portfolio flows have increased. The overall effect has been to engineer a moderate correction of the current account, but to leave it dependent on much less reliable sources of funding.

This has had the effect of disrupting the Central Bank of Turkey’s (CBT) management of the currency. Whereas, prior to the coup, the CBT exploited upticks in portfolio flows to rebuild its reserves, since the coup, despite healthy inflows at times, it has had to run down its reserves. The latest data shows reserves at USD 115bn, an improvement over the month of January, but down around USD 10bn from July 2016.

Secondly, the deterioration of diplomatic relationships has increased the risk to the current account. Relations with Europe and the US are important to the tourism industry, as mentioned, but trade relationships go much deeper than this. Turkey being a member of the EU customs union, with half of its exports going to the EU, leaves the trade balance vulnerable to any EU sanctions. As we noted in January 2017, there are signs that currency depreciation has had some effect in rebalancing trade, but in 2017, this was swamped by an increase in the oil price, which led to an overall deterioration of the trade balance. (Exports and imports outside of oil rebalanced as net export volumes continued to increase to offset the price effect). The overall current account position therefore remains precarious.

The fourth quarter of 2017 gives a taste of what could happen if capital flows dry up. The amount of portfolio flows dropped 90% over this quarter, and the CBT upped its reserve drawdowns, spending over USD 8.5bn in December alone. At these rates, the central bank would run out of reserves within a year, and this would necessitate a rapid correction of the lira. It looks as though the CBT has been able to recover some reserves in January. However, the risk remains. One problem is that a “run” on the lira could materialise very quickly if investors withdraw capital as they see the CBT’s reserves dwindle, resulting in a rapid collapse of the currency.

Overall, therefore we see that the risk associated with Turkey’s external accounts has increased. It is now highly dependent on portfolio flows and the central bank’s reserves to fund its large current account deficit. Naturally, this has already weighed on the lira to some extent (our Balassa-adjusted PPP measure suggests that it is around 35% undervalued against the G4 currencies) and over time, we would expect some rebound. A long lira position could be a rewarded risk over time. Political risk could be alleviated by the government’s overdue removal of the state of emergency, and the CBT could further reduce pressure by decisively tightening monetary policy. Right now, though, this is a risky play.