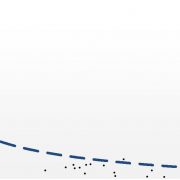 The Bank of England’s Chief Economist Andy Haldane made headlines recently for a speech delivered in Bradford. Markets reacted to an unexpectedly hawkish speech from the MPC’s most prolific dove, who cited improvements to global growth and inflation expectations in support of moderate tightening.

The argument is interesting, and has some important global applications. The global Phillips curve has been flattening since the 1960s. This poses difficult dilemmas for central banks who are being sent different signals from inflation and unemployment numbers. If the relationship were to weaken too much, the rationale for inflation targeting would be called into question.

Some of Haldane’s argument is highly specific to the UK. There has not in general been increase in self-employment elsewhere in the developed world (a fact which should provoke some reflection on the importance of the so-called “gig” economy). The focus on zero-hour contracts is also likely a UK-specific concern. However, there has been a significant rise in part-time, temporary and insecure work, all of which is well-known and documented. The entry of women into the workforce was likely significant in these trends, as they are more likely to have part time or temporary jobs.

One measure which captures the shift from a highly centralised labour market to a more competitive “divisible” economy is the Penn World Table’s “average annual hours worked by persons engaged” statistic (AAH), which has the advantage that it offers a long time series dating back to before the decline in the slope of the Phillips curve. This measure should fall as markets become more “divisible” as more temporary and part-time work becomes ubiquitous.

The AAH DM average is plotted against the DM average Phillips curve slope in Figure 1. Two things are immediately obvious: