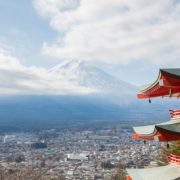 Japan’s Current Account: Out of the Red, Safely into the Black?

Japan’s current account now stands at ¥1.59tn (about 3.8% of GDP annually) – a far cry from the start of 2014 where a dip in income from Japanese investment abroad and a seemingly relentless decline in the trade balance took the current account into the red by 1.6% of GDP. Since then, we have seen enormous growth in the current account back to pre-crisis and pre-Fukushima norms. In this blog post we take a look at individual drivers of the current account to better understand the long term sustainability of Japan’s renewed surplus.

The largest component of this surplus is the investment income that Japanese investors earn from abroad. Such a large investment income is the result of years of recycled current account surpluses abroad and an amassed net international investment position of over $3tn. Although the implied net return on these investments has declined since 1995 from around 6% to 5%, it remains relatively stable on aggregate which means we are looking for a more cyclical factor. In fact, an important driver of changes in the Japanese investment income appears to be the exchange rate. With the Yen considered by many – dare I say the Japanese too – a funding currency, there may be some expectation of return from maintaining foreign currency exposure. This is despite asset-currency correlations providing the opportunity for volatility reduction via hedging given the Yen’s risk-off nature.

The long-run relationship between investment income and the exchange rate would indeed suggest that the Japanese on aggregate prefer unhedged foreign investments; the monthly investment income component of the current account appears to have been boosted by Yen depreciation in 2H14 via increased Yen denominated returns. This factor has been a significant driver of income flows over the last decade and could have improved the monthly current account balance by as much as ¥800bn (about $6.6bn) since mid-2014. Looking forward it seems likely that investment income changes will stabilise unless the Bank of Japan pursues a materially weaker exchange rate, which seems unlikely after October’s monetary policy meeting.

While not as large as the income component in absolute size, the trade balance has really been the main driver of the current account improvement, more recently driven by a collapse in import expenditure while exports remain supported, presumably by the weak Yen. It is well known by now that Japan’s trade deficit between 2011 and 2014 was a casualty of elevated oil imports following the Fukushima disaster – prior to this around 25% of Japan’s electricity generated was from nuclear sources. Imports began to consistently outstrip exports as Japan begins importing more fuel, and the dollar yen exchange rate moved over 25% from 80 to 102 on the back of exceptional monetary policy divergence.

We are not surprised that statistically speaking, oil prices and the exchange rate do have a significant impact on Japan’s trade balance via goods imports. Using this historical statistical relationship between goods imports and the price of oil denominated in Yen we have provided a naïve scenario analysis of the Japanese trade balance based on the trajectory of the oil futures curve and various exchange rate developments, assuming the relationship holds and other factors remain constant (exports, service imports and number of barrels imported at ~3M a day). The numbers need to be taken with a pinch of salt but suggest that the Japanese trade balance – and current account – is not quite structurally sound and could be subject to oil price and exchange rate developments. It goes without saying that there could be further significant differences between realised oil prices and those implied by futures over the next year.

To structurally maintain an improved trade surplus in an environment of potentially rising oil prices, a good start would be for Japan to make further progress on restarting nuclear power plants. While one plant has been successfully restarted, only seven out of forty-two remaining reactors look likely to be turned on over the next few years, according to Reuters. Various legal battles and tougher safety standards are naturally slowing down the process. Even if external energy reliance were reduced, some factors are out of Japan’s hands; Japanese exports are reliant on a buoyant global economy – with 18% and 22% of exports destined for China and the US respectively – a condition which on balance looks likely to disappoint.

These are all short to medium term factors, and it is also worth thinking about other longer term wheels that have already been set in motion. The proportion of the population aged 20-65 (a proxy for those in the saving stage of the life-cycle hypothesis) peaked at  63% in 1996 before falling to 56% in 2014, and is expected to decline further to 53% by 2030 according to the United Nations. As you would expect, household saving rates have followed a similar decline, falling from 23% in 1980 to 6% in 2014 as measured by the OECD, and it is the corporate sector which has supported overall saving rates. If Japanese corporates begin to move away from the tradition of low pay-out ratios (which appears to be the case, see here) and overall saving rates begin to decline further, the current account could come under renewed pressure, assuming the government sector continues to run a deficit, which seems likely! With these factors considered it appears that recent current account strength could face headwinds from several possible sources; increasing energy prices, a subdued global economy, and declining long-run saving rates.