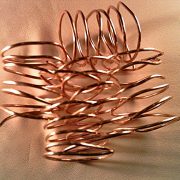 How Tight is the Copper Market? Implications for Chile

A large part of the story of emerging market currencies over the last year is the impact of commodity price movements in effecting significant transfers of wealth. An extreme case of this is Chile. The world’s largest producer of Copper Ore depends on this resource for a little over half of its exports. The recent plunge of the metal’s price has accompanied a severe deterioration in its terms of trade

There is evidence that the tide may be turning for the economy’s main export, with Chinese imports well above trend. However, historically, it requires very high levels of scarcity for there to be serious price rises in metals market. There is a hockey-stick-like relationship between the stock-to-use ratio and backwardation (the slope of the futures curve and a good proxy for the tightness of the market). The “normal” state of the copper market is very loose, going into backwardation only during periods of rapid constriction of excess capacity and stocks (see Figure 1). It took phenomenal growth of over 250% in Chinese demand from 2000-2007 to bring about the kind of price increases we saw in the mid-2000s. To bet on rapidly-rising prices is to bet on a historically rare phenomenon.

So just how tight is the copper market? Taking the stock-to-use ratio as implied by the World Bureau of Metal Statistics (WBMS) data, in the last month for which there is data, there were only 1.8 weeks’ consumption of stocks in the world. This is nearly as low as during the surging copper prices of 2006-2007. Ostensibly, stocks are bullish for Copper.

However, the wildcard in the copper market is the Chinese State Reserves Bureau (SRB). Time and again it has intervened to influence the copper market by buying and warehousing stock or taking short positions. In 2005, a scandalous investment decision which cost the organisation $200 million sent the price of copper tumbling to $4160/MT. In 2009, buying by the SRB helped support world prices, and in 2015, it is rumoured that SRB exploited low global prices to build up its stock piles. The quantities involved here are significant: the most recent intervention was supposedly to the tune of 200,000 MT, almost as many as the stocks accounted for by the WBMS.

So just how much copper is there out there, and how different is it to the official time series? One way to get a ball-park idea of the difference is to compare global surpluses (axiomatically, this is equal to stock growth) to official stock growth. Taking these time series and cumulating them from 2006 (Figure 2) shows a significant rise in stocks above-and-beyond those available in the official data series. Contrary to the data from official warehouses and surveys, stocks did not fall as the copper price declined. And crucially, the market is not now anywhere near as tight as it was in 2006.

Although we are not justified in arguing that it accounts for all the difference, SRB interventions are discernible in this data series as well. Taking the difference between the cumulative surpluses and the WBMS stocks (Figure 3), we can see the series jump in 2009 as the SRB intervened to support the world copper price. We can also see confirmation that the SRB has exploited recent low prices to expand its reserves.

SRB policy will then be vital for the performance of copper in 2016. If prices stay low, it may well continue its policy of buying at what it perceives to be the bottom of the market. But if prices rise, we may see the SRB selling off its copper stocks to support China’s housing market… or keeping hold of them to support Chinese smelters. The magnitude of the difference between publically available stock data and cumulative surpluses suggests that the answer to this question will be vital. To take a position on copper is to second-guess SRB policy- any takers?

And what does this mean for Chile? To take a position on Chile for the next year would also be to second-guess SRB policy but a silver lining for the economy is that the extent of pass-through from the copper price to growth in the medium-to-long run can be overstated. For a flexible economy, such a shock should have only temporary effects. In the case of Chile, Eyraud[1] provides comfort by demonstrating that statistically, nominal GDP and nominal copper prices are cointegrated, so a fall in copper prices should lead to a one-off hit to GDP, but not harm long-run growth. Moreover, most of the decline is over the first three years. This paints a more optimistic long-term picture in which the pain may be (mostly) over for Chile, regardless of the future evolution of the copper price.

[1] L. Eyraud (2015). “End of the Supercyle and Growth of Commodity Producers: The Case of Chile”, IMF Working Paper