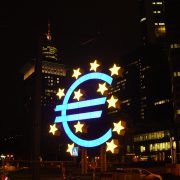 How Far Can the Euro Go?

The standout performer in the G10 currency universe in 2017 has been the euro. Against the dollar it has appreciated by more than 10%, supported by a strong macroeconomic backdrop and receding political risk. GDP growth is running at a healthy 2.3% YoY, supported by investment, consumption, and trade. Though slack remains in the labour market, unemployment has reached a six-year low. On the political front, though risks remain, the French election result was highly market-friendly. The election of centrist Emmanuel Macron and, more importantly, defeat for the Eurosceptic Marine Le Pen, has given the single currency a stay of execution and calmed investors enough for macroeconomic fundamentals to exert their influence.

Figure 1 shows this year’s euro move in context. In historical perspective, neither the euro’s appreciation nor its prior weakness is unprecedented. Euro strength could also have a long-way to go. In order to match its real-terms historical high, the euro would need to reach around 1.66 against the dollar. This analysis suggests further that in order to reach Purchasing Power Parity (the pair’s historical fair value anchor point), a further 15% appreciation would be required.

In this post, we seek to corroborate this analysis by examining the fundamentals of the Eurozone economy and how they relate to the currency.

One way of estimating the fair value of a currency is the FEER (Fundamental Equilibrium Exchange Rate) framework. This focuses on the role of the exchange rate as a shock absorber for the economy over the medium-to-long run. Fluctuations of the real exchange rate are assumed to ensure a sustainable balance of payments. Thus, for example, if an economy is running an unsustainably large current account deficit, the currency must depreciate in order to boost net exports and foreign income and correct the imbalance. Similarly, an economy cannot run consistent current account surpluses, since at some point, its consumers and investors will no longer be willing to export enough capital to offset the inflows and will look to consume the wealth that they have earned. The currency will then appreciate, choking off the current account surplus.

Figure 2 shows the position of the Eurozone’s balance of payments. The current account stands at 3.12% of GDP, driven by its large surplus in goods. The economy’s large positive trade balance is well-known, but what is interesting is that it is only being sustained by significant capital outflows in the form of portfolio investment leaving the Eurozone (3.15% of GDP). In other words, the Eurozone’s entire current account surplus is being leaked overseas through the net selling of domestic securities and net purchasing of foreign ones. This is driven by two things: firstly, the Eurozone crisis, followed by political instability, spooked investors. Secondly, the advent of Quantitative Easing (QE) saw an increase in outflows, as investors driven out of domestic securities sought returns elsewhere. Clearly, this is an unsustainable situation and is supportive of further currency strength to come.

Of course, a fair value estimate says nothing about how and when a currency can be expected to get there. The euro could have a bumpy ride in 2018 due to Italian elections, political shenanigans around the Catalonian crisis, and Brexit. The still-expansionary stance of ECB policy is also likely to weigh on the euro for some time to come. In the medium run, though, this analysis provides support for the idea that the euro remains significantly undervalued, and that the structure of the Eurozone economy supports further appreciation.

[1] The first is based on a theory that economies have a short-to-medium-run “fair value” current account; the second on the fact that economies cannot run deficits or surpluses indefinitely.