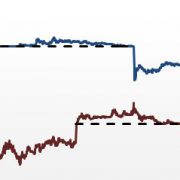 CZK and CHF: A Tale of Two Currency Markets

On 6th April 2017, the Czech National Bank (CNB) announced an end to their currency floor. On 15th January 2015, the Swiss National bank (SNB) had announced an end to their currency floor. Here, the similarities end. Whereas the Czech koruna experienced a moderate appreciation (1.64%) against the Euro, the Swiss franc experienced a 12.3% appreciation over a comparable period. Effects on businesses, consumers and investors were of corresponding magnitudes.

We explore the reasons for such a wildly differing market reaction. In short, the response to the floor removal was affected by 1) economic fundamentals 2) market and political pressure and 3) the degree to which the central banks communicated ahead of time their intentions to remove the floor. While the SNB unexpectedly removed the floor in the face of growing political pressure, reserve accumulation and pressure on the current account, the CNB telegraphed the removal of the floor ahead of time, and was able to remove the floor before the pressure to do so had become unbearable.

Further exacerbating this is the “safe haven” nature of the Swiss franc, which caused greater pressure on the currency at a time which encompassed political crisis in the Eurozone. This is not something the CNB was required to contend with.

As a consequence of attempting to ward off currency strength, the SNB’s balance sheet was already much larger at the point the floor was introduced.  By the time of the floor removal, reserves were up to 80% of GDP, raising significant danger of large capital losses if the Swiss franc suddenly strengthened. By contrast, although Czech reserves were growing quickly at the time of the floor removal, this was from a much lower base (Figure 2).

The Czech Republic was also not required to contend with the same political dynamics associated with reserve accumulation. Swiss opposition to reserve expansion was significant, due to suspicions that it could lead to hyperinflation. This culminated in a referendum in November 2014 which would have essentially outlawed the policy of a currency floor. The “yes” campaign was led by “save our Swiss gold”, a group which opposes fiat currency entirely, and won 20% of the vote. These kind of political pressures were simply not present in the Czech Republic.

A final reason for the much more controlled exit was the level of central bank communication. In the Swiss case, the SNB had affirmed just days before the removal of the floor its centrality to Swiss monetary policy. Managing Director of the IMF, Christine Lagarde, expressed surprised that even she was not prepared for what was coming. The consequent shock depreciation hit businesses and households badly.

The CNB’s case could not have been more different. The CNB had provided a hard guarantee (end of Q1 2017) for the floor and a qualitative criterion (sustainably high inflation) for the removal of the floor. It was repeatedly re-affirmed that the CNB could remove the floor at any point after March 2017. Consequently, most businesses to whom it mattered had hedged their CZK exposure ahead of time.

Once consequence of this was that in the run-up to the removal of the floor, a significant cross-currency basis had arisen in the EURCZK pair (Figure 3). In effect, using a 1 month forward, an investor was paying up to 5 basis points to take a long position in the koruna. Although this reduced significantly in the run-up to the floor removal as the CNB’s comments about slow wage growth raised doubts about the likelihood of the floor removal, it had the effect of discouraging investors from taking a “free bet” on the end of the floor. In contrast, as the SNB had not given any warning of the impending collapse of the floor, pressure on the forwards (particularly from hedgers) was significantly lower. No basis opened up and investors were free to take long positions in the franc. This resulted in a much more extreme move once the floor was removed.

Although management of the SNB’s currency floor clearly left something to be desired, they were contending with a very different economic and political picture. Market pressure to remove the currency floor began well before their economic objectives had been met. Dropping the floor occurred only once the policy itself had become unsustainable. Any attempt to prepare the market for this would have led to rapid reserve accumulation from a high base. The CNB, on the other hand, had the space to prepare the market for the removal of the floor once their inflation target had been met, and before reserve accumulation had become excessive. They also did not face the same degree of political pressure for floor removal.

In the aftermath of the Swiss floor debacle, many would have been tempted to conclude that currency pegs of this kind are always destined to end in economic disaster. The CNB’s experience shows that this is not necessarily the case. In retrospect, Switzerland may be the worst place in the developed world for a central bank to try and hold the exchange rate weaker that its market value. In other circumstances, as we have seen, it need not always end in disaster.