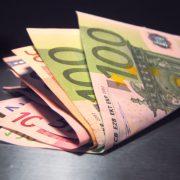 Or, why we will continue to pump more billions into Greece even before the next bailout/default.

So here we have it, there are now only 142 bn Euros of deposits left in the Greek banking system (end April). At the current rate this will be down to around 130 bn Euros now which is equivalent to about 10,000 Euros per Greek account holder (or 20,000 per working Greek). At some point, only the small fry is left and the amounts are small enough such that the transactions costs of leaving the Greek banking system are prohibitively high. This could be at 100bn Euro.

Anyhow, what’s happened? There are now roughly the same amount of Greek Euros outside Greece than inside.

Courtesy of the ECB (which enables the flow of Euros to continue into the Greek banking system via ELA), we have allowed a costless exit route to any middle class and wealthy Greeks with a bit of sense to park their money elsewhere in the Eurozone, free of charge, with full protection.

The government wants more money, while the Greeks themselves vote against their own government by taking their money out and allowing the rest of Europe to take on the liability.

The interesting thing is not that Greece is now a black hole, but what’s going to stop it sucking in ever increasing amounts of Euros?

Consider this: Tsipras has re-instated previous pension levels, the minimum wage, and hired back public sector workers. It’s 2007 all over again. At the same time, Varoufakis keeps asking for more money to uphold the quality of life the Greeks deserve for little in return.

As long as ECB acquiesces it’s OK, but there is no formal mechanism to stop this circular flow of Euros. In a gold standard Greece would have defaulted a long ago, in a classic sovereign-cum-banking crisis.

In the current system, essentially the Greeks can indefinitely postpone structural reforms as long as ECB raises the ELA limit. If the ECB does not want to eject Greece and it is clear that the Greeks won’t eject themselves, then it goes back to Merkel. Only core Europe can call this off…