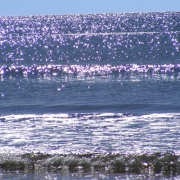 Why is FX volatility low? An econometric model

So far, 2018 has been an eventful year. Financial markets have been heavily affected by the policies of US President Trump, whose tax cuts in January have spurred the US economy forward, leading to higher bond yields, tighter monetary policy and a stronger US dollar. This has come at a time when the US Federal Reserve has been winding down its balance sheet, withdrawing liquidity and leading to a step change in equity market volatility compared to 2017. The President’s trade policy has also been a significant source of news headlines, with threats of tariffs on China ratcheting up over the year, and a bombastic approach to the renegotiation of NAFTA casting a cloud of uncertainty over Canada and Mexico’s future trading terms. In a Europe bereft of leadership, a new Italian government has flirted with breaching the Eurozone’s Stability and Growth Pact, as Chancellor Merkel has had her wings clipped by domestic political problems. This risks reigniting the Eurozone crisis. The other spectre haunting Europe, Brexit, has continued with apparently little progress and now increasing risk as the March 2019 deadline approaches.

And yet, FX market volatility remains remarkably subdued. The average of a G10 currency’s volatility against the US dollar in 2018 is an annualised 7.14%, measured on a daily basis. This compares to a long-run average of 9.5% (since 1990). Options markets forecast this to continue, with the CVIX (a measure of implied volatility in developed market FX) trading at 7.87, versus a historical average of 9.82.

In this blog post, we develop an econometric model to explain FX market volatility over time. In short, we find that the low volatility environment can be mostly explained by underlying economic factors. Specifically, we look at monetary policy, terms of trade, and economic data, and find that together these justify lower FX volatility, despite the risks on the horizon for G10 FX. Most of the reduction in volatility in 2018 compared to its long run average can be attributed to lower terms of trade (commodity price) volatility, and lower volatility of 2 year bond yields (likely due to more predictable monetary policy). The implication of this is that, should these factors change, then FX volatility will reappear.

Volatility is a complex phenomenon which is very difficult to explain directly. The statistical behaviour of volatility can be illuminated to some extent by GARCH (Generalised, Autoregressive, Conditional Heteroscedasticity) models, but the fundamental factors that give rise to volatility are somewhat obscured by this because volatility can be understood not as a phenomenon in itself, but only as a derivative of price changes. This is the approach we take here.

Conceptually, we can see FX moves as being driven by three factors: firstly, macroeconomic factors which determine the fundamental fair value of exchange rates; secondly, shorter-term economic factors and policy decisions which determine the pace and path exchange rates take to get to these fair values; and thirdly, purely supply and demand driven moves.[1] Bleaney and Francisco (2009) develop a conceptual framework which considers the first two of these. At any given time, let the log of the real exchange rate be defined:

From this, it follows that:

In principle, if we can estimate equation (1), it becomes possible to attribute the variance of an exchange rate to its component parts from equation (2). Given the discussion above, we should also distinguish between disequilibrium factors driven by macroeconomic and flow (supply and demand) factors.

We pursue a similar technique for decomposing the volatility of currencies. However, we use a Behavioural Equilibrium Exchange Rate (BEER) model estimated on daily data. This blurs the distinction between equilibrium and disequilibrium drivers of exchange rates, since BEERs typically have aspects of both. However, there are three main advantages to this approach. Firstly, a BEER is not wedded to any particular theory of equilibrium exchange rate determination, so there is less risk of making incorrect economic assumptions which hinder the accuracy of the model. Secondly, this allows us to estimate the fair value based on daily data, which means we can calculate volatility over shorter time horizons and, for example, study the drivers of volatility in 2018 as a distinct time period. By contrast, the data underlying a more theoretically grounded FEER model would restrict us to considering monthly changes. Thirdly, BEER models are estimated using OLS regression. If correctly specified, the residual is uncorrelated with the regressors, which means the covariance term can be dropped.

Specifically, we estimate, for each G10 currency, the following equation:

To get a picture of the contributions each component makes to FX volatility, we have graphed the average G10 currency’s volatility against the US dollar, broken down into the portions explained by the model and the residual (see Figure 1) both over the long run and in 2018. In 2018, most of the shortfall in volatility versus the long-run average (74%) can be attributed to changes in the volatility of the BEER specification.

We can go one step further, however. Because we have specified the behaviour of FX based on the macroeconomic environment, we can decompose the volatility we have explained into the sum of terms which are functions of the volatility of and correlations between the three main macroeconomic drivers of exchange rates we have identified. We can then identify precisely what it is about 2018 which has led to lower FX volatility. The results are shown in Figure 2. We can see that while there is significant variation across currencies, the two largest contributors to low volatility have been suppressed terms of trade volatility, and lower volatility in two year yields.

The result is intuitive, and easily interpretable. Commodity price volatility has dropped significantly since mid-2014, when the shale oil revolution and the slowdown in China shook global markets. Both appear to have driven commodities markets to a new, lower price and lower volatility equilibrium. Notwithstanding supply disruptions and a moderately higher oil price in 2018, by and large there remains spare capacity in the oil market, from OPEC and potentially from US shale oil producers. And slower Chinese growth has increased the excess supply of most metals. Regarding the lower volatility of two year yields, this can be explained by the monetary policy environment. Most central banks are not yet hiking rates, and those that are (the Federal Reserve most conspicuously) have yet to surprise the market in any significant way. Most monetary policy changes have been well-telegraphed.

Are these permanent features of the landscape? It is certainly possible that a fundamentally reconstituted supply chain of commodities markets and the advent of forward guidance have shifted FX markets to a permanently lower volatility. There is not nearly enough evidence to conclude this yet, however. Most likely, both of these are primarily reflective of the stage of the economic cycle we are in, and should global dynamics shift, we would expect to see volatility return.

[1] The last factor is an important consideration. It means that spot rates can fluctuate without any revision of the market’s view of the desirability of holding a currency. Instead, spot moves can arise purely in order to incentivise the entry of capital to meet surges in demand.