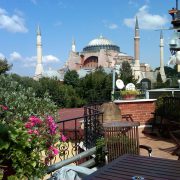 In August, we warned of a “nightmare” economic scenario in Turkey which combined run-away inflation, a worsening current account and insolvency of Turkey’s large FX debt. Since then, the data and policy emerging from Turkey has done little to assuage our concerns.

Turkey’s November current account data seem, on the face of it, to confirm this gloomy picture (see Figure 1). An improved primary income was more than offset by further deterioration of the trade balance by nearly 1 billion dollars. The Current account deficit now stands at an annualised USD 27.2 bn, ominously close to our calculation of the CBT’s usable FX reserves.

This headline number obscures some crucial dynamics, however. The first is the J-curve effect: it is well known that the short-term effect of currency depreciation is deterioration of the trade balance. Since prices react quicker than patterns of trade volumes, the mechanical effect of increasing the price of imports and decreasing the price of exports dominates the effect of changing purchasing patterns in the short term, while the Marshall-Lerner conditions guarantee sufficient elasticity of net exports to the exchange rate than in the long term, depreciation has a positive effect on the trade balance.

Figure 2 shows our calculations of this breakdown. The FX effect is negative for both exports and imports, as expected. However, there is significant evidence of a compensating effect of imports, implying shifting consumer patterns. Digging into the detail, then, shows that some rebalancing is occurring, which will put Turkey on a more sustainable footing in the future.

These are depressing headline numbers, but as we show above, there may be a chink of light for Turkey in the detail. Whether it will be enough to prevent a crisis, of course, remains to be seen.