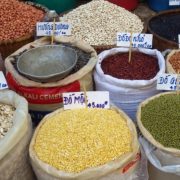 The Carry Trade in Commodities: What is it?

What is a carry strategy?

The returns to a carry strategy carry are, broadly speaking, a compensation paid to speculators who are willing to assume the risk of market participants. Properly regarded, the equity risk premium is a carry premium, as it rewards speculators for assuming the risks associated with the uncertainty of a firm’s profit. Similarly, the term premium in bonds is a carry premium, as it is compensation for lending at riskier time horizons (we have less knowledge about what the world will look like in ten years’ time than five). The currency carry trade is a premium paid to speculators who are willing to lend to riskier economies (who normally have current account deficits).

How does this work in Commodities?

Why not just long positions?

What do backwardation and Contango represent?

The slope of the futures curve provides information about the relative value of the commodity now and in the future. A commodity which is scarce relative to its past supply (measured by the stocks-to-use ratio) will tend to be in backwardation, so that it becomes more expensive to purchase the commodity now, rather than in the future. With steep contango, the opposite is the case: the price of the commodity for delivery today is at a discount, reflecting its relative abundance. The “neutral” state of a commodities curve is also contango, reflecting the impact of storage costs which means that anyone wishing to forgo the physical cost of storing the commodity by buying it forward will have to pay a premium.

The relationship between the stocks-to-use ratio and the slope of the futures curve is illustrated in figure 1 for Crude Oil.

What produces the returns from the carry trade?

Why are these returns not arbitraged out?

At first glance, this is a violation of the efficient markets hypothesis. It appears that the futures curve systematically misjudges the spot movement. This is misleading, however. As with other carry trades, the non-zero expected returns to this strategy come as a compensation for risk. In return for taking on the risk of the spot price movements, the speculator is rewarded with a premium.

The defining feature of a beta (as opposed to alpha) source of return, is that it reflects a pure exchange of risk in which there are no “losers”. In explaining why betas occur, it is therefore important to explain who is losing money in expected returns, and why they are willing to do so.

A firm issuing equity, for example, is willing to pay a higher cost of funding than one issuing debt because in doing so, it faces obligations which are conditional on its performance, thus transferring risk from itself to speculators. In bonds, firms pay interest rates higher than the time value of money when they are transferring risk to the bond holders, who are accepting the possibility of capital losses in the event that the firm defaults.

To understand where these returns come from in the commodity carry trade, it is important to understand the commercial purpose of commodities futures. Commodities futures were deigned to allow those with natural, undiversified exposure to commodities prices to reduce or eliminate this exposure. Thus, a shale oil producer may lock in an oil price before beginning drilling by taking a short position in WTI futures. Large food producers may take long positions in corn futures to hedge their natural short position. These entities’ cost of hedging is the flip side of the speculator’s returns to the carry trade…

[3] A commodity with a higher futures prices than spot prices is said to be “in Contango”.