With thanks to Diego Cacciapuoti for research assistance

Explaining the inflation and rates divergence

Low and stable inflation in Japan this year (3% headline compared to 8.2% in US) has been a puzzling aspect of the Japanese economy to investors in view of its reliance on energy imports and significant Japanese yen depreciation year-to-date, both highly inflationary shocks to the system.

In essence, Japanese economic policymakers resorted to a different set of policy instruments when faced with higher commodity and food prices at the beginning of this year. Specifically, the Ministry of Finance issued special deficit-financing bonds to subsidize food and energy bills and limit the pass through of higher global energy prices to labels that local consumers see. Financing of course was itself subsidised via the Bank of Japan (BoJ) through its Yield Curve Control program. Subsidies have indeed achieved a lower food and energy price inflation outcome in Japan which has led to stable headline inflation figures in a range of 1-3% (Figure 1).

But non-core CPI items such as food and energy only account for around one third of the CPI basket weight in both the US and Japan, so there is more at work here. Beyond the direct impact of subsidised energy prices, low and stable headline inflation owing to these subsidies has also limited wage demands, expectations of inflation, and broader pass through to core CPI in Japan. An effect which was reinforced by the different stage of its labour market. Faced with a rising cost of living in addition to the leverage within the labour market to act on it (with unemployment at historical lows and low participation rate), US households are demanding higher wages. The resulting nominal wage growth has triggered a more hawkish Fed to prevent inflation expectations from de-anchoring. In contrast, the unemployment rate in Japan remains well above previous business cycle lows, driven in part by a higher labour force participation rate. Coupled with well anchored inflation expectations and fewer fears of ‘higher for longer’ inflation – and perhaps a more deflationary mind-set – households are yet to adjust their wage growth demands (Figures 2 and 3).

Hence it was the different path of core CPI in US and Japan that ended up driving the inflation wedge between the two economies, perhaps an outcome carefully engineered by Japanese policymakers which also enabled the continuation of current easy monetary policy bias via the BoJ as there was no visible de-anchoring of inflation expectations risk.

As long as wage demands, household inflation expectations and core CPI (i.e. the demand-side of the inflation equation) remain balanced, the Bank of Japan is unlikely to shift away from its current policy mix. In addition, the issuance of debt to soothe near-term inflation pressures can at the margin encourage a more dovish Bank of Japan in the medium-term through debt sustainability concerns. The continuation of Yield Curve Control therefore means the Japanese yen will remain vulnerable to further upside in UST rates (Figure 4).

In the near-term, recent commentary around FX pass through to local prices indicate that the central bank is following currency developments closely. Following this line of thinking (i.e. the desire to not restrict the demand-side of the economy but limit FX pass through), FX intervention (both verbal and real) is the first line of defence ahead of a material change in interest rate policy – with press reports last week suggesting that the BoJ had been conducting FX quote checks with local banks and with an actual FX intervention carried out earlier today.

In the longer-term, significant yen undervaluation and an improvement in Japanese yen fair value (through a lower inflation profile) sets the stage for yen tailwinds, though for that to happen, the trajectory of monetary policy will need to change in either Japan or the US. 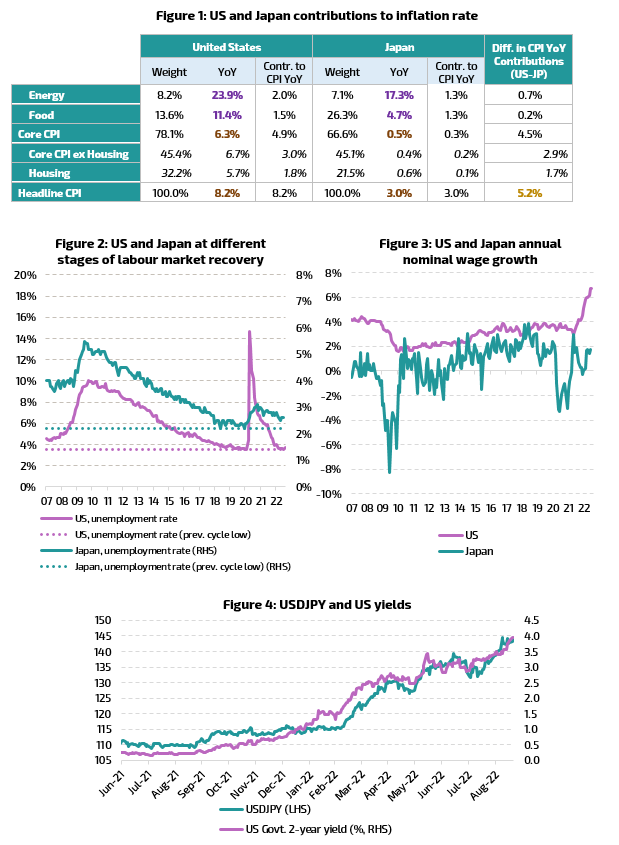 Issued in the UK by Record Currency Management Limited. All opinions expressed are based on our views as of 22 September 2022 and may have changed since then. The views expressed do not represent financial or legal advice. We accept no liability should future events not match these views and strongly recommends you seek your own advice to take account of your specific circumstances. This material is provided for informational purposes only and is not intended to reflect a current or past recommendation, investment advice of any kind, or a solicitation of an offer to buy or sell any securities, or any of our products or investment services. Any reference to our products or services is purely incidental and acts as a reference point only for the purposes of this note. The views about the methodology, investment strategy and its benefits are those held by us.