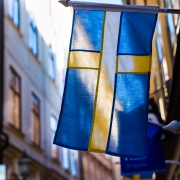 The Swedish krona had a tough start to the year having depreciated 5.6% against a basket of G4 currencies, as a rate hike by the Riksbank in December 2018 was shortly followed by weak economic data from both Sweden and the Euro Area. Firstly, signs of economic weakness in the form of softer than expected inflation and PMI data were seen to be a precursor of the Riksbank turning more dovish. Secondly, given the Riksbank’s shadowing ECB policy following the Eurozone crisis, weakening growth momentum in the Euro Area and a dovish ECB has pressured the krona more broadly. With this background in mind, this blog post outlines some of the main factors affecting the currency’s outlook.

As of April 2019, things are looking slightly better for the krona. The currency remains undervalued against its G10 peers, it is supported by a central bank still expected to raise rates this year, and a strong external sector adds additional fuel to this outlook. We’ll take each of these arguments in turn along with the potential downside risks.

Purchasing Power Parity (PPP) is accepted to be a reasonable estimate of long-term fair value in developed market currencies. Our analysis suggests that when a currency moves far away from the fair value signalled by its purchasing power versus another currency, this produces an opportunity for arbitrage between two economies which, if large enough, is exploited by market participants. One potential downside of using PPP however is that it does not take into account relative productivities, rate differentials and balance of payments mechanics which are prone to influence currency movements even in the long run. While PPP is a reliable estimate for economies with similar characteristics in the long-term, a complementary model is useful for the broad G10 universe. Therefore, we incorporate our Record Fair Value (RFV) model alongside PPP valuations into this analysis.

Our RFV model, which is a Behavioural Equilibrium Exchange Rate model (BEER) and which takes into account productivity, terms of trade and rate differentials, would suggest that the krona appears to be undervalued against all G10 currency pairs (Figure 1).

The krona’s undervaluation has been driven by the combined depreciation of the spot exchange rate, and a concurrent improvement in currency’s fundamentals which served to improve the fair value of the currency. Figure 2 below attributes the krona’s performance since January 2014 to change in the fair value and the spot movement unexplained by the model. Figure 3 looks at the drivers of the change in the fair value over the same time frame. Firstly, the krona’s recent weakness against the US dollar, euro and the Norwegian krone seems to be unjustified by the change in macroeconomic parameters employed by our BEER model. This would also suggest that the currency’s current weakness is not due to US dollar cycle. Secondly, Figure 3 suggests that the krona seems to have performed better in terms of trade, inflation and growth dynamics compared to US, Norway and the Euro Area. The only negative contributor to its fair value estimate appears to be a decline in real yields versus these economies which is very much in line with the Riksbank’s ultra-loose policy stance since the Eurozone crisis.

To be more specific, observing growth and inflation differentials versus its peers since 2010 can give us a good idea into factors driving changes in the krona’s fair value, and by extension deviations from PPP fair value. Sweden has outperformed US, Norway and the Euro Area in terms of GDP growth performance, doing so in a more benign inflationary environment. Both of these factors drive trends in the real exchange rate (Figure 4, Figure 5).

A similar picture appears when the Swedish krona is plotted against the Norwegian krone in a historical value analysis framework. The krona appears to fluctuate around its historical lows for the real exchange rate based on inflation differentials. This current level also corresponds to a 20% undervaluation based on PPP which has proven to be a good indicator of a potential long-term correction via FX spot, historically (Figure 6).

One explanation of the krona’s recent weakness, despite strong GDP growth and low levels of inflation, is the very dovish stance that the Riksbank had maintained since 2015. Explanations of this ultra-loose stance include risk of a policy mistake in the aftermath of the Eurozone crisis and concerns around the impact of excessive currency strength to a small open economy like Sweden. However, the Riksbank recently turned hawkish at the end of 2018 and hiked its policy rate to -0.25% in December while keeping a tightening bias into 2019. Following the turn of the year, lower growth considerations have prompted a number of G10 central banks to turn more dovish, including the Fed. The Riksbank stands out as an exception to this trend as the central bank stayed committed to its hiking cycle in its February meeting by keeping its policy rate projection unchanged. There were minor adjustments in its inflation and growth forecasts in the short-term; however the bank expects the same underlying trend to prevail in the year-end (Figure 7). Effectively, the bank forecasts inflation hovering around its target rate, strong growth momentum, and a positive output gap which would reinforce the view that a tight monetary policy stance may be needed.

Sweden has maintained a strong current account surplus averaging 5.4% of GDP since 2001. This consistent current account surplus helped create a pool of Swedish-owned investments abroad as it was offset by a negative financial account. This, in turn, bears fruit as Sweden now receives a sizeable investment income as a result of these excess savings. A substantial positive net international investment position, coupled by higher real yields offered abroad supports this positive investment income flow. These flows, which amount to 1.5% of GDP on average, helped sustain Sweden’s current account surplus in recent years (Figure 8). With rest of the G10 economies turning more dovish and rates likely to increase at home, a partial reversal of these capital flows could be possible, which would create an additional tailwind for the krona.

In addition to potential investor flows, changes in hedging behaviour may also be a consideration. If interest rates keep rising domestically, and in accordance with the Riksbank’s outlook, hedging foreign currency will become less expensive from an interest rate accrual perspective. This would have a more pronounced effect especially for managers with asset holdings in the Euro Area as they will be paid an increasing positive interest rate differential to hedge their currency risk back to the krona. If hedge ratios increase in line with this, the additional hedge pressure would create mechanical demand for the krona. Given the size of these investments relative to the Swedish economy, this could have a sizable impact on the currency.

4-) Potential downside risks to this outlook:

The positive outlook for the krona is not without risks. As a small and open economy, Sweden may not be impervious to a more pronounced global slowdown. This would inevitably limit the potential upside on the currency and put downside pressure on rate expectations. Secondly, the Swedish central bank has not followed its own policy rate trajectory more often than not (Figure 9). This also might explain the muted reaction to the recent rate hike to an extent. If the Riksbank surprises to the downside again, this could limit the appreciation potential of the currency. Hence the 2019 recital of the central bank is likely to be critical. Thirdly, Sweden is facing domestic political challenges which caused a deadlock in forming the government after the elections in September 2018. The deadlock was resolved recently and a government has since been formed. The social issues that caused the rise of Eurosceptic parties in the most recent elections are likely to sustain a cloudy political outlook with potential implications for the currency, however.