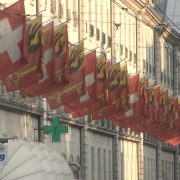 On the 15th of January, the SNB abandoned its 3 and a half year old policy of preventing the Swiss Franc from appreciating to below 1.2 Francs per Euro. The move caught market participants by surprise and created a large degree of panic and uncertainty in currency markets. Just like the SNB, the CNB began a process of preventing the Czech Koruna from appreciating to less than 27 per Euro in late 2013 that continues to date. In this post, we wish to explore the differences between the two regimes and the reasons behind why we think the CNB’s EURCZK floor may be seen as slightly more predictable and manageable (today) than the EURCHF floor given the events of January 15th.

The SNB established the exchange rate floor on the basis of an extremely overvalued Swiss Franc. While deflation was a secondary concern, the primary concern appeared to be the economic impact of a highly overvalued currency on Switzerland’s real economy (particularly exports) and the real economy impacts of extreme levels of exchange rate volatility. This was emphasized in the original monetary policy statement and later on by members of the SNB as well.

The CNB on the other hand stressed the importance of meeting its inflation target of 2% +/- 1% after hitting the zero lower bound of interest rates in the year prior to launching interventions. The potential use of the exchange rate as an instrument in monetary policy was discussed in the months prior to the official announcement of the interventions and the decision was framed as being data driven and necessary purely to fulfil the CNB’s inflation targeting mandate.

This becomes clearer when we analyse the path of the central banks to the establishment of their currency floors. In the SNB’s case, rates were at the ZLB (zero lower bound) for only a month after which a decision on the floor was taken. The impulse was an overvalued exchange rate (EURCHF weakened more than 20 % in the previous 12 months) that had remained extremely volatile over the previous few weeks. In the CNB’s case, rates were at a 0 % for more than a year. Only after it was apparent that deflation was likely to manifest for a sustained period of time was the decision to use the exchange rate as a tool taken up by the monetary board. Furthermore, in the months prior to the intervention announcement, the EURCZK exchange rate had remained fairly stable and had actually strengthened by around 6 % in the previous 12 months.

Finally, it was apparent in early January that the ECB was due to begin quantitative easing. The imminent possibility of at least $50b entering the financial system every month with a lot of it possibly getting routed into Switzerland was probably enough to scare the SNB away from continuing with the floor regime. It appeared and continues to appear unlikely that there can be a flight to safety to the Czech Koruna in a similar fashion.

It is common knowledge that the Swiss Franc is seen as a safe-haven currency as a result of Switzerland’s external surplus, stable price levels and sound fiscal policy. Such characteristics however make it difficult as well as extremely expensive to artificially suppress currency strength during risk-off periods. This is because Francs are effectively being sold at a market discount to participants in extremely large quantities. The Czech Koruna on the other hand is not seen as a safe-haven currency under most circumstances. It lacks the same economic history and reputation as Switzerland and maintained a current account deficit in the decade prior to the establishment of the EURCZK floor. As a result, both the current pressures as well as the potential pressures on the central bank maintaining its floor are significantly lower relative to the SNB. The lower likelihood of there being large and rapid inflows of capital into the Czech Republic (relative to Switzerland), make its currency floor easier to manage and defend.

Until the financial crisis, both the SNB and the CNB maintained a similar amount of reserves as a % of GDP. Post 2009 however, and especially around the start of the Eurozone crisis, the SNB began accumulating large amounts of FX reserves to prevent the Franc from strengthening. This level reached a fairly alarming 80 % of GDP by 2015. It is worth noting that reserves as a % of GDP are far higher in Hong Kong (~120%) and slightly higher in Singapore (~ 85 %). However in both those cases, maintaining price stability is not a part of the monetary authorities’ mandate; all that is required is the management of the exchange rate peg (Hong Kong) or basket (Singapore). These economies rely on the dynamic nature of their real economy to do the heavy lifting whenever there is an external shock. The same cannot be said for the SNB and CNB; but the fact that the CNB has a way to go before its reserves even begin to approach the levels of the SNB’s would suggest that the CNB can probably maintain its floor for longer.

An exit from a period of maintaining an artificially weak currency floor would result in a central bank bearing losses as its foreign currency holdings would be worth fewer units of local currency once the local currency is allowed to float again (and presumably appreciate). Both the CNB and SNB have maintained that it is not necessary for a central bank to maintain positive equity and that it is perfectly acceptable for a central bank to bear losses for sustained periods of time as long as that behaviour is commensurate with its policy mandate. However, the SNB has historically maintained (unlike the CNB) that it is in the long term interest of a central bank to maintain some amount of positive equity in order to demonstrate credibility to the market, the reason for this being that a central bank should not have to issue banknotes and collect seigniorage purely to meet operating expenses as this may be at odds with its policy mandate. A similar point has been recently made by the Bank of England staff in response to “Corbyn’s QE” and helicopter money. Furthermore, since the SNB is an “Aktiengesellschaft” (German for corporation with shareholders), the SNB needs to maintain some amount of stability with regards to its dividend payments to the cantons that in many cases budget anticipated SNB dividend payments in advance. The CNB on the other hand has operated with negative equity since 1996 and notes that this has had a minimal impact on its ability to credibly conduct monetary policy. They note that negative equity that is a result of changes in the valuation of reserves does not represent a “structural” loss component and would normally have the ability to reverse itself in the long term so long as the central bank is seen as credible and able to fulfil its policy mandate. The SNB can be seen as being more sensitive to absorbing losses on its balance sheet (and possibly more conservative) than the CNB. This political backdrop could significantly impact the willingness and ability of the SNB and the CNB to absorb losses.

In sum, we think the macro rationale, currency characteristics, size of the balance sheet and views on negative equity suggest that the position of the Czech National Bank may be different from that of the Swiss National Bank in January 2015. Monitoring medium-term growth and inflation forecasts, as well as the state of FX reserves will probably be the best indicators of the state of the EURCZK floor, in keeping with its slightly more “data dependent” nature. Interestingly, recent growth and inflation numbers from the Czech Republic point to a possible exit from the regime that may be earlier than what the CNB has stated.