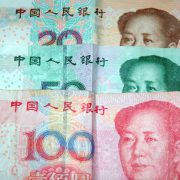 Recent Trends in the RMB

This year the RMB has bucked its recent trend and remained broadly stable against the US dollar for the first half of 2017. As the Trump reflation trade has unwound to some degree, and the dollar retraced, the RMB has seen some depreciation against its main trade partners. For policymakers in China this is a convenient outcome, though there exists a delicate balance to maintain. Too fast a depreciation risks discrediting recent emphasis on ‘relative stability’ and the recent change to the PBoC’s fixing mechanism looks to be a reflection of this need.

Up until the end of May, the CNY traded in a narrow range against the US dollar, though at the beginning of March a gap opened up between the trade-weighted US dollar and the direct bilateral USDCNY exchange rate (figure 1). While sentiment on China this year has improved on a relative basis, market participants still worry about a number of issues including softer growth, financial instability, and the impact of deleveraging, which has encouraged this disconnect. A flat USDCNY exchange rate in the face of a depreciating dollar more generally, has therefore led to a decline in the trade-weighted RMB index (figure 2).

To policymakers, this is not a bad outcome. Firstly, a trade-weighted depreciation provides some much needed offsetting stimulus to counterbalance rising lending rates and efforts by officials to crack down on leverage in the economy, which will weigh on growth (figure 3). Secondly, China has battled both speculative and domestic outflows, and depleted around a quarter of its reserves in the process. A weak dollar but stable China/US bilateral exchange rate allows for a supportive depreciation, while helping to discourage capital outflows and replenish currency reserves (figure 4). Admittedly, it is difficult to tell whether the recent stabilisation in capital outflows is indeed down to improved domestic sentiment or more effective capital control measures.

The new fixing mechanism for CNY

While a trade-weighted depreciation is certainly convenient, PBoC officials will be keen to maintain perceptions of ‘relative stability’, whether that be against a currency basket, or against the US dollar (the emphasis appears to change depending on the dollar’s trend). In line with this objective, towards the end of May, the PBoC unexpectedly changed its USDCNY fixing mechanism, adding a counter-cyclical adjustment factor. Previously, the fix was determined by two components primarily; the prior day’s close in USDCNY and an adjustment factor which aims to keep the trade-weighted RMB stable.

The first component helps to explain why USDCNY and the DXY index recently diverged, and the new countercyclical adjustment factor aims to promote two-way flexibility but prevent these kinds of unwarranted divergences in the future. In the days running up to the fixing change, USDCNY fixings came in far below what previous market closes implied, and the recent change could partly be an ex-post rationalisation of these lower fixes. In effect, this new methodology gives the PBoC a greater degree of discretion over the fixing rate, should it judge USDCNY to be diverging from fundamentals.

The recent depreciation of the RMB index has been part of a longer-term adjustment to macro adjustment under which the RMB has depreciated on a trade-weighted basis by around 8.5% since the start of 2016. However, from the perspective of exposure to Chinese currency risk, it is essential to assess returns on a total returns basis which include the accrual interest rate differentials, rather than the spot performance independently.

While the CNY has depreciated by 4.7% and 5.0% against the US dollar and G4 currencies respectively since the start of January 2016, total returns for the same period were positive at around 1.4% and 2.3%, respectively. The RMB has therefore compensated holders on a total return basis via a higher nominal interest rate. According to prevailing forward currency curves, this interest rate differential is expected to persist into the future and if so, will continue to form an important component of return for the RMB.