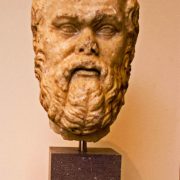 “All I know is that I know nothing.” Socrates

For all the bluster from both the Bremain and Brexit camps in the EU referendum debate, very little can actually be known about the pros and cons of British economic life outside the EU. Yes, there are an unknown but certainly large number of jobs linked to British trade with the EU. Undoubtedly, some of these would go. At the same time, we have no idea what the relative importance of the loss of these jobs, and, on the other side of the ledger, reduced regulation and import substitution, and the ability to make our own trade deals, would be.[1] Similar stories can be told about the FDI and investment flows on which Britain is so dependent, although there is already evidence of a negative effect on the London Housing market.

What is known is that in the event of Brexit, article 50 of the Lisbon treaty plunges the UK in to an (at least) 2 year-long negotiation on the terms of exit, in which the only thing that is certain is that the range of potential outcomes is huge. The one thing markets hate is uncertainty, but how much uncertainty does the market expect?

3-month At-the-Money implied volatility (the expected level of volatility) and ‘risk reversals’ (a relative measure for the cost of insuring sterling downside against the euro) for EURGBP options spiked on 23rd March (the first day which brought the referendum within range of these measures). This is reflective of a “Brexit Premium” priced in by sellers of options who are clearly expecting potentially huge moves on the day.

We can use options to price the expected price moves on the day, as well. As the delta of an option is (roughly) equal to the market’s estimate of that option’s being exercised, for different strike rates, we can construct a probability density function, which looks like this:

We can see that there is significant tail risk, here. If the UK leaves the EU, a significant depreciation of sterling could be on the cards. What should not be overlooked, however, is that in the (likely) event that the Bremain campaign triumphs, there could equally be a not-insignificant appreciation of sterling. Those positioning for further sterling depreciation (that is, non-commercial traders on net, see figure 3) should be wary of this tail risk as well.

In summary, the overwhelming message from markets is one of uncertainty and volatility. As is often the case, Socratic scepticism is the order of the day…