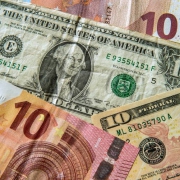 Debt-to-GDP ratios are often used as a proxy for a government’s ability to pay off its debt in the long run. As a rough indicator of credit risk, it can impact directly on sovereign yields. However, the debt reported in this common ratio represents only a part of the government’s total liabilities. We are aiming to estimate the total amount of government liabilities in European countries and evaluate the sustainability of these liabilities.

Remarkably, taking European countries as an example as debt sustainability is a hot issue in the continent, the debt–to-GDP ratio, representing only explicit direct liabilities does not exceed 100% for all countries except Belgium, Greece, Italy, Cyprus and Portugal. Meanwhile, the total liabilities exceed 100% of GDP for all but 3 countries; Denmark, Romania and the Czech Republic, and exceed 300% of GDP for over half of European countries (Figure 1). This raises the question whether such levels of government liabilities are sustainable, especially in an environment where conventional monetary policy has reached its limit and there are calls for fiscal stimulus to sustain economic growth.

For many countries, pensions are one of the main sources of liabilities that are unaccounted for in the government’s core accounts and this number is likely to rise in the coming years for demographic reasons. Indeed, in countries such as France, Germany, and the United Kingdom, the population is ageing at an increasing rate, putting increased pressure on pension schemes. Those countries that do not have a high proportion of public pensions as liabilities predominantly rely on private pension schemes, which could be a more sustainable way to tackle this problem. Public pension schemes often provide higher benefits for individuals compared to private pension schemes and are therefore preferred by the public. Public pensions are predominantly defined benefit schemes, relying on current taxpayers’ money to pay out current retiree pensions. However it can also be reasonably assumed that with the ageing population public pension schemes will need to be altered and may no longer be sustainable.

A study conducted by the World Bank found that if a country’s debt-to-GDP ratio exceeds 77% for an extended period of time, it slows economic growth and therefore can be classified as ‘unsustainable’. However this does not take into account the liabilities that are not accounted for in the ratio. It is worth therefore acknowledging that the debt-to-GDP ratio uses a ‘narrow’ definition of government liabilities as it excludes several measures of assessing a government’s risk of default, which can be assessed in a broader definition of government liabilities. Indeed, implicit contingent liabilities must take into consideration the stability of a country’s financial system and its exposure to external risks. If the country has stable financial and regulatory systems, there is a lower risk of institutions defaulting, which the government would potentially need to bail out. Similarly, if a country is less exposed to natural disasters, the government is less likely to need to intervene with emergency spending. It is therefore crucial to assess not only the amount of the country’s contingent and non-contingent liabilities but also the means for which they are being used or estimated.

The current low level of bond yields in most advanced economies is enabling the government to increase spending at low borrowing costs. Any catalyst for structurally higher yields (of which there are several possibilities) would increase the debt burden of governments and increase the risk of default. This could have a direct effect on fiscal spending including education, foreign aid, science and technology, which in turn is likely to further dampen economic activity and output.

Monetary policy in developed countries has arguably become less effective in recent years. Conventional monetary policy has reached its limit as interest rates in many countries have reached or even gone below zero. Meanwhile unconventional monetary policy, such as asset purchases, has shown decreasing effectiveness as additional rounds have been introduced. The long term effects of such policies, including of negative interest rates, are still unknown and are therefore approached with caution by central banks. This has prompted central banks such as the ECB to call for fiscal stimulus to accompany monetary stimulus in order to sustain economic growth. It is therefore questionable to what extent governments will be willing to provide fiscal stimulus, with the existing elevated amount of liabilities on their balance sheet and increasing future pension payments. If governments increase their fiscal spending further this could act as a disincentive for foreign investments and reduce capital inflow, potentially weakening the currency.

Meanwhile, modern monetary theory suggests that monetary and fiscal policy should be coordinated, and ultimately increased fiscal spending should be the focus for sustaining economic growth. If the central bank prints enough money in order to sustain the fiscal spending needed to support economic growth, there should not be any concerns regarding increasing government liabilities per se. However this raises a particular problem for countries in the EU where the EU constitution requires all government spending to be financed through taxes and debt and therefore does not allow for the monetary authority to finance government spending. In other countries, where debt monetization or helicopter money may in principle be permissible, it introduces macroeconomic risks such as inflation.

Japan has the highest debt-to-GDP ratio in the world, exceeding 200% for over a decade and over 100% of GDP since the mid-1990s. Although there has been a perpetual concern that the country may default, it has been able to manage this high level of debt for several decades. This ratio excludes the liabilities of Japan’s local governments, government guarantees, pension obligations, and unpaid bills. Therefore, similarly to countries in the European Union, a broader definition of government liabilities beyond the debt-to-GDP ratio can be applied in assessing the government’s risks. Given Japan’s elevated debt-to-GDP ratio, the amount of total government liabilities is also likely to be substantially higher than for European countries. Moreover, its demography and geography put Japan in a disadvantageous position with regard to implicit liabilities. Japan’s population has been ageing, much like in European countries; however the dependency ratio in Japan is estimated to be close to 70 in 2020 while the equivalent measure in Europe is estimated at 54. The dependency ratio represents the amount of people aged below 15 or above 64 for every 100 people aged between the ages of 15 and 64. Japan is also located between four tectonic plates, making it extremely susceptible to natural disasters, therefore increasing its implicit contingent liabilities for purely geographical reasons. Such disasters do not only increase government spending, but also decrease productivity and output, therefore amplifying the negative effect on the country’s debt-to-GDP ratio.

There are also several characteristics of Japan’s debt, which could explain why the country has been able to manage such high levels of government debt for several decades, at rates which in other countries would be alarming. Firstly, most of Japan’s government debt is owned domestically by the central bank or local residents. Central bank holding of government debt has been increasing consistently over the past decade and can be expected to further increase (Figure 2). Although this may be due to cultural or legal reasons, this limits the risk of international exposure and reduces the risk of government default, as it can issue more debt which can be financed domestically. The ease of domestic financing is likely rooted in the fact that the Japanese government owns the Bank of Japan, unlike in Western countries such as the US, UK and Europe, and can therefore print as much money as it needs in order to finance its debt. Indeed the Bank of Japan owns approximately 70% of Japanese government debt. Meanwhile, countries in Europe and the US have substantial amounts of government debt that is foreign owned, making them more vulnerable to the vagaries of external private financing. Japan also has a flexible exchange rate and controls the central bank, unlike the Euro Area where all the countries are bound by the same exchange rate and central bank. Japan provides an example of a country where high levels of government liabilities are arguably sustainably managed and perhaps contribute less to the risk of government default. It is therefore important to not only assess the size of the various types of liabilities but also the ways in which they are financed and the country’s flexibility in being able to handle an unexpected need for government spending, without the risk of defaulting.

The role of currency

Currency sometimes acts as a shock absorber for changes in economic productivity/competitiveness, government spending, borrowing costs, inflation, etc. For example, if inflation elicits an interest rate increase (in line with the Taylor rule), this can support the currency through increased yields while also straining inflationary pressures in the economy. Interest rates can also react to inflation surprises or volatility in the output gap, with the currency as an additional equilibrating factor. This raises a particular issue for countries in Europe where countries have varying amounts of government debt, yet are bound by the same currency. The euro is arguably undervalued for countries with lower debt levels that would potentially be able to sustain higher interest rates and a stronger currency.

Looking to the long term

Real interest rates are negative across G4 economies and have been below 0 in the Euro Area since 2015 (Figure 3). A negative real interest rate indicates that inflation is higher than the nominal interest rate, and therefore that the debt owed by the government is somewhat naturally being inflated away. Indeed, an inflation rate above the nominal rate of interest in the economy, assuming stable real GDP growth, can reduce the government’s real debt burden (Figure 4). However, for Japan this may not be substantial enough in order to curb the nominal increases in government debt, especially as inflation is slipping below its 2% target for most advanced economies.

A more decisive and likely effective solution to the issue is to perform a social reform, possibly similar to the one realised in Brazil this year. In October, Brazil passed a pension reform which is set to stabilise the government budget and prevent an exponential growth in government debt. The social reform increases the retirement age to 65 years for men and 62 for women, from 56 and 53, respectively. The reform is set to increase government savings by an equivalent of $194bn over the next decade. The government has been able to send across the message that the reform would mostly benefit future generations, encouraging social support for the reforms. If such actions are to be put in place in European countries the population must be made aware of the strained public finances and understand the need for social reform, which will likely require cooperative commitment from several governments.