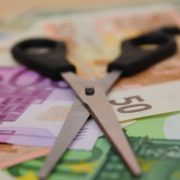 The chart above, courtesy of Standard & Poor’s and the WSJ, purports to put the total financial losses of a full “Grexit” accruing to Germany at a grand total of EUR 90.6 billion, or just over 3.1% of German 2014 GDP.

Interestingly, this would be in addition to the transfers to Greece that all EU countries (Eurozone and non-Eurozone) make on a net basis as part of the EU budget disbursements every year. The bulk of this is falls under the rubric “cohesion and structural funds” which were set up to accelerate the “convergence” process between EU (previously EC, EEC) member states. The largest net receiver of such funds is currently Poland, followed by Greece, in absolute terms. In fact, in 2013, Greece received EUR 5.4bn or just over 2% of Greek GDP. If there is a Grexit, therefore, it would cost Germany just under EUR 100bn in this financial alone, so the numbers say…

Yet, as with damned lies and statistics, there are at least two ways to look at this from a counterfactual perspective. Could this represent an opportunity cost Germany was and is willing to incur for wider benefits (economic and non-economic)?

Let’s look at two of the economic ones below:

What has been the effect of the pent up demand for German government debt obligations within the Euro as opposed to a world in which the Deutschemark was legal tender? It may be instructive to look at the spread between Swiss and German bond yields (their economic cycles are reasonably correlated) to try to deduce what German bond yields would have been in a DEM as opposed to EUR world. From 1992 to 1998, the 10y spread between German government bonds and Swiss government bonds averaged 1.8%, compared to 1.2% since the introduction of the Euro. The relative safe haven of Bunds (driven by the post-GFC world, but also as a cheap option to hedge against Euro breakup risk) have thus “saved” the German Federal government a good deal in terms of the counterfactual scenario. Adjusting for this spread premium of 0.6%, and applying this to the EUR 2.76 trillion of German gross debt issuance (medium and long term issues) cumulative since the introduction of the Euro (1999-2014) represents a total saving of EUR 16 bn per annum or EUR 265bn cumulatively. There are caveats to this conclusion, of course, as the path of issuance is not independent of the debt servicing costs, and 10y is slightly above the average duration point of German issuance in this period (here). Nonetheless, the orders of magnitude are in the hundreds of billions of Euros, not the tens of billions.

What about the weaker exchange rate? Again, it may be instructive to look at a comparison between Germany and Switzerland, as the exchange rate between the two was broadly cyclical around a mean of 1.18 DEM per CHF for 20 years (see chart below), after which, partly because of the introduction of the Euro and partly due to safe haven demand for the Swiss Franc in the last few years, the legacy DEM effectively depreciated by a large amount (60%) against the Franc. This is at a time when both countries experienced roughly the same rise in labour costs, so purchasing power parity would have suggested the real exchange rate between Germany and Switzerland would have also remained stable during the Euro period. How much stronger would the DEM be relative to the EUR? While accounting for the safe haven demand effects is difficult, studies have shown that a post-1999 DEM would be about 30%/40% stronger than the EUR is today. Assuming an export price elasticity for Germany of 0.8 and a third of that for imports (as per the European Commission’s latest findings, here) and trade openness of 40% in Germany (here), translates into a cumulative 7% of GDP boon over this period thanks to the Euro, or about EUR 200bn benefit that Germany has accrued since the introduction of the Euro.

The perceived direct financial cost of a Grexit for Germany is ultimately not the real cost. In fact, we can point to two areas in which there has been a direct benefit, which we put in the order half a trillion Euros (conservative estimate) for Germany alone.