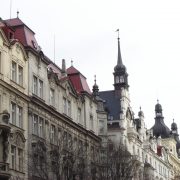 Czech That Out ! A story Foretold in FX Markets

The CNB announced earlier today that they abandoned their commitment to the EURCZK floor at 27 CZK per EUR whilst also saying that they will only intervene to prevent “excessive” exchange rate moves. The initial reaction has been muted, with a modest CZK appreciation circa 1.4% against the EUR at the time of writing, but additional pressure from the re-establishment of short EURCZK positions might cause CZK to appreciate over the medium term especially seeing as CNB Governor Rusnok stated in this press conference that this was likely the beginning of a tightening cycle. Furthermore, from a fundamental macro point of view, Purchasing Power Parity (PPP) would suggest a stronger CZK vs almost all major currencies including EUR.

At this point, it is reasonable to ask how this compares to January 15 2015, when the Swiss National Bank undertook a similar task when confronted with the need to remove the EURCHF floor. While the initial conditions are different, i.e. CZK is a much less traded currency, and not at the neuralgic centre of the FX markets as the Franc, there are lessons to be learned even at this early stage in terms of how central banks remove pegs.

First, the Czech National Bank (CNB) must be congratulated in the way it managed to cause minimal disruption from the de-pegging, whether one looks at spot moves, implied volatility, liquidity air pockets below 27 and simply good old fashioned market sentiment, where participants seem to have taken this move in their stride. The key to why this was successful in avoiding market stress and further collateral damage was to do with the CNB’s extremely transparent and well telegraphed communication about the end of the peg arrangements. Market participants had been repeatedly told the conditions under which the peg might go, namely, inflation hitting the target of 2% and staying consistently above it, something that has been the case since late last year (see chart below). Since the beginning of 2017, CNB officials repeatedly told the market in no uncertain terms (for what is usually stale central bank speak) that there was a very real possibility that they might remove the peg at any point this year (the latest pronouncement being Governor Rusnok in the local media muting in March that the most likely timing of exit is still “the middle of 2017”.

This increasingly targeted, transparent and focused “forward guidance” (to borrow a phrase) begun to be significantly priced into EURCZK forwards as early as 2016, and pricing became even more acute in 2017, so that the “carry cost” of a long 1m EURCZK forward in March was about 3.5% (annualised) and 80bps (annualised) at the 12m horizon. In essence, CNB policy was extremely adept at dissuading long CZK speculators (with little natural CZK asset exposure) from taking large trading positions given that the opportunities for profit and loss were finely balanced should the peg break. Market equilibrium pricing resulted in what was beginning to look like a zero profit trade at inception, given the expectation of CZK appreciation once the peg was removed.

By pre-committing itself to the “time” dimension, the CNB managed to avoid a large market dislocation. This is something that the SNB refused to do, and, by keeping its options open in terms of when to remove the peg perhaps in avertedly ended up sacrificing the “volatility” dimension of the final outcome once the peg was removed. Not all pegs are created equal (the SNB’s task was arguably an order of magnitude more complicated given the need to recycle Switzerland’s large current account surpluses outside the CHF zone and the sizable headwinds this resulted in), yet the lessons to be learned will certainly serve future central bankers, perhaps in Croatia, or even Denmark and Hong Kong as well.