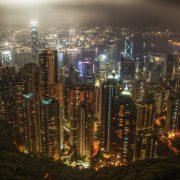 Causes and Implications of the Hong Kong Dollar’s 2017 Decline

Since the beginning of 2017 the Hong Kong dollar has depreciated by 0.8% versus the US dollar. In light of the currency board arrangement in place which pegs the HKD to the USD at a level of 7.80, this is a sizeable exchange rate move. Weakness in the HKD appears to be driven mainly by diverging interest rate differentials which are a symptom of excess money in the Hong Kong banking system. Although speculative pressure has appeared limited thus far, signs of bets against the currency are beginning to emerge. However, according to the Hong Kong Monetary Authority (HKMA), the move is “…not a concern”, and absent a deliberate shift in monetary policy from the HKMA after more than 30 years, the HKMA look willing to defend the upper bound at 7.85. In fact, some market participants think that the HKMA have already stepped in to tighten liquidity and reduce pressures emerging from widening interest rate differentials with the US.

We believe the recent upwards movement of USDHKD can be mostly explained by a widening HIBOR-LIBOR spread (relative interest rates). This interest rate difference has made HKD an attractive funding currency for carry trades since the start of 2017, causing capital outflows and exchange rate depreciation. In June, HKMA chief executive, Norman Chan, warned that this could happen; capital outflows would increase if the interest rate differential continued to widen. This widening differential, which is relatively unusual given the HKMAs commitment to peg the HKD to the USD, appears to be explained by the existence of excess liquidity in the banking system and a competitive mortgage market; banks, flush with capital and competing for mortgage loans and other business, are reluctant to raise rates. Thus, while the HKMA has been gradually raising the base rate in accordance with the Fed’s FFR target, Hong Kong interbank rates have not risen commensurately.

Implications for the USDHKD peg

With regard to the USDHKD peg, these developments appear unlikely to change the behaviour of the HKMA materially. Firstly, weakness in the HKD of this magnitude is not unprecedented, with similar levels being reached in 2008 and throughout the 80s and early 90s. The HKMA echoed this sentiment publicly, stating “the recent weakening of the HKD is not a concern to the HKMA”. Secondly, the HKMA has a sizeable level of foreign currency reserves ($400bn and 125% of GDP) at its disposal to defend the peg, should interest rates diverge further. Thirdly, most of the exchange rate move (so far) appears to have been driven by diverging interest rates, not a speculative attack on the fundamental value of the currency. Normally, when there are heightened expectations of HKD weakness, buying US dollars forward becomes more expensive. For most of 2017, this has not been the case and buying US dollars forward has actually become progressively cheaper (in terms of forward points) and as a result of diverging deposit rates the headwind for HKD based hedgers has become stronger.

That said, over the last week we have begun to see some indication of speculative pressure emerging. The ‘cross currency basis’ can normally be used as a measure of this pressure and indicates how far FX forward prices are diverging from covered interest parity pricing. The existence of a US dollar liquidity shortage complicates the analysis, however we observe that the USDHKD cross currency basis has fallen sharply since the beginning of the month. As this move was absent from other USD currency pairs, it may suggest carry speculators could have specifically used the forward market to go long USD.

Earlier this week the HKMA announced it will issue $HK 40bn of Exchange Fund Bills, which led to a sharp appreciation of the HKD; the market interpreted this as the first signs of the HKMA draining liquidity in order to increase interest rates and deter bets against the HKD. If bets against the HKD persist, or the exchange rate moves closer to the 7.85 upper bound, we would expect the HKMA be proactive in the defence of the currency board, absent any structural shifts in the setting of its monetary policy.